If you are pursuing a college degree in Maine, getting arrested and charged with an underage DUI, drug crime or other criminal offense is a scary, unnerving ordeal. Panic may set in as you begin to think about repercussions and what will happen next.

As a college student, you are investing a lot in your future, and one bad event starts to call into question those plans.

Will I Lose My Chosen Career?

All is not lost. Don’t assume you will have to give up on your career goals after an arrest. In fact, I’ve helped restore the future plans for many aspiring college students facing criminal charges in Maine.

I can carefully evaluate the state’s case against you to determine where the best opportunities lay for a positive resolution.

If you are facing a Class C felony or a Class D or E misdemeanor, I may be able to negotiate with the prosecutor for a deferred disposition. If you complete the requirements of the deferment during the probationary period, I can act on your behalf and petition the state to drop the charges.

If the prosecutor and judge agree, the charge will be dismissed and you will not have a criminal record.

Some students might also face a disciplinary hearing at their university. The consequences of this hearing can range from expulsion to a notation in your transcripts. Depending on the school’s policies, I may be able to advocate for you during this process.

My criminal defense practice in Maine works to protect the rights and futures of college students facing any of a number of offenses, including:

If convicted, the potential punishment for these offenses ranges from mild to severe. Depending on the circumstances, some charges could be elevated to felony crimes. However, if you are a first-time offender, we may negotiate for community service in lieu of jail time.

How a Criminal Defense Attorney Works for You

A student facing any kind of charges in Maine should hire a qualified defense lawyer as soon as possible. It is unwise to engage in guesswork or make assumptions about where you stand within the criminal justice system.

Prosecutors are always working toward a conviction, and much of that work takes place without your knowledge. That’s why you need an experienced, local defense attorney representing you at all times.

I aggressively defend your rights throughout this process. I can work with you to protect your interests until the best possible resolution to your case is reached.

A driver age 18 to under 21 who operates a motor vehicle with any detectable amount of alcohol or drugs in their body can be charged with OUI or operating beyond license restriction in Maine.

Before doing anything else, consult with a lawyer who specializes in DUI defense and has experience representing college students.

A college student can take steps to greatly improve their bargaining power with the court and the state. Find out what you should do right now to protect yourself by calling Hartley Law.

Can I Lose My Financial Aid?

Federal financial aid can be suspended for most drug offense convictions, including underage possession of marijuana in Maine. Even a misdemeanor conviction for a first-time OUI could result in the loss of any scholarships you receive.

An experienced college student defense lawyer can work toward preventing a conviction against you so you don’t lose your financial aid. You have rights that protect you from unjust prosecution. Contact Hartley Law to learn more.

Your federal financial aid package will not be immediately affected if you are facing a conviction. However, next year’s aid will be in jeopardy of suspension by a criminal conviction entered against you in the current year.

If you’ve been arrested for a DUI in college, chances are you’ll be charged with OUI first offense. In Maine, the offense falls under OUI laws for “operating under the influence of intoxicants.”

You will be considered a first-time offender if you have no prior DUI arrests in Maine or any other state. A qualified DUI lawyer can leverage this fact to your advantage, allowing you to prevent the OUI charge from becoming a permanent record.

Impaired driving is a criminal offense that prosecutors take very seriously in Maine. An attorney with a proven success record knows how to analyze the evidence to assess if the police officer was following correct protocols, or if your rights under the law were violated.

I have extensive experience mounting strong defenses against driving under the influence of alcohol or drugs. If you are a domestic or international college student facing OUI charges in Maine, you need the advice of an attorney who understands all of the implications and how best to mitigate their impact. 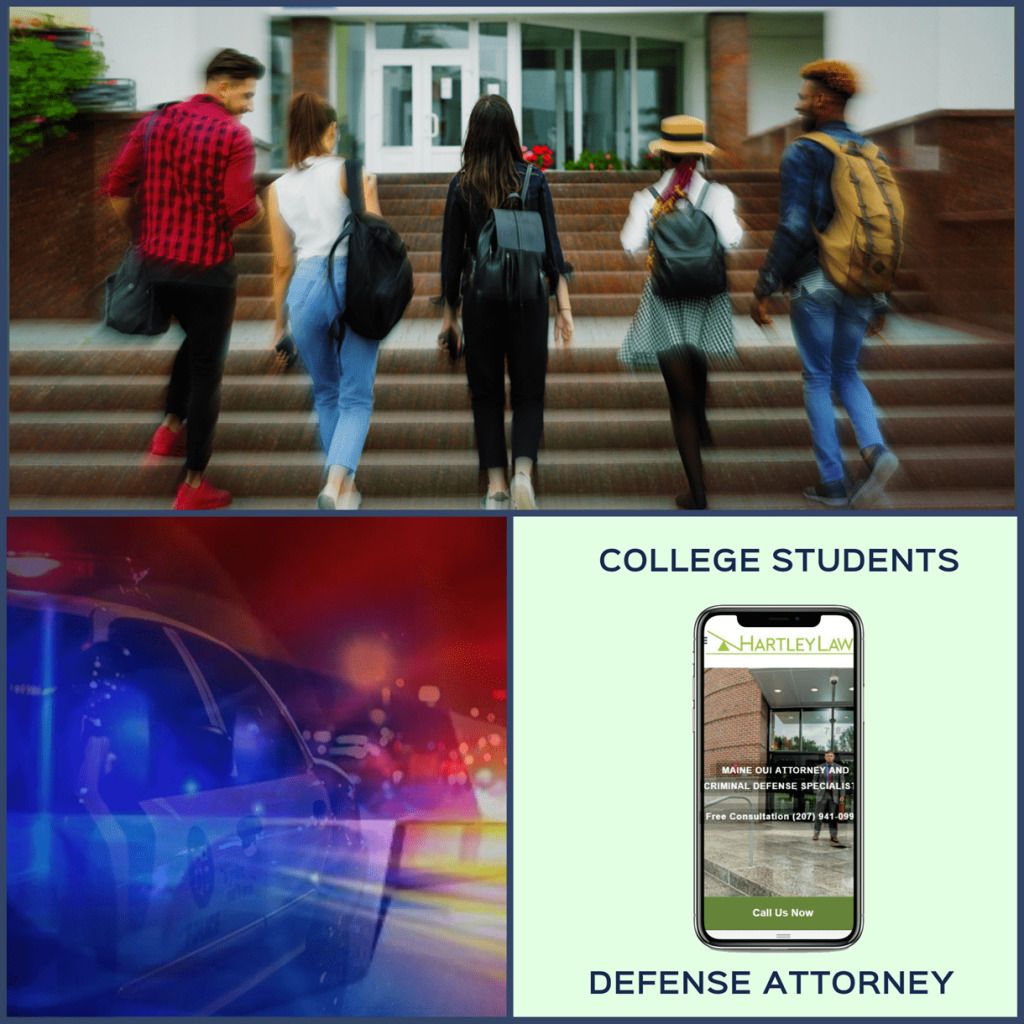 Your son or daughter has turned to you for help with their legal trouble. They face uncertainty and need to know what will happen to them now, and in the future. I answer those questions. I also talk to you, the parent because I understand you have the same concerns.

In my defense practice, I’ve talked to and met with many parents to provide them with helpful information about the criminal process in Maine. I also give guidance on what steps should be taken in order to obtain the best possible outcome in your child’s case.

Contact Hartley Law today to discuss the case and obtain information and advice. There is no financial obligation on your part.